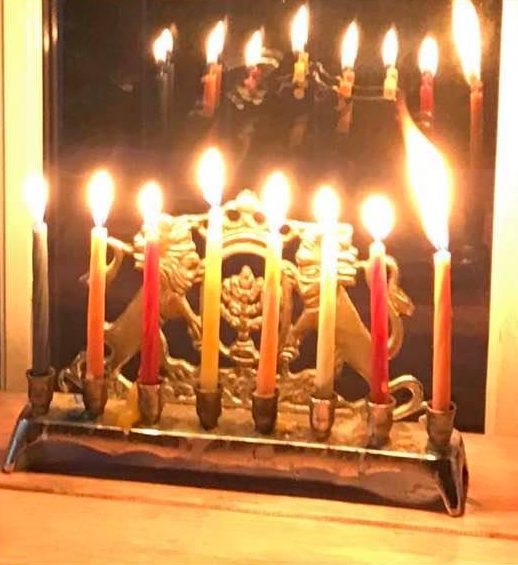 Sometimes it takes a bad experience to turn us around. Although I had basically no Jewish affiliation and was far along the secular continuum, our four year old son attended a Jewish pre-school. Now that we had children I thought I should try to offer them some kind of Jewish community/identity.  I certainly didn’t feel qualified to offer much beyond bagels and lox and a few Yiddish words.

To supplement the Jewish pre-school, we lit the Chanukah candles and gave our sons EIGHT presents, one each night. I was competing with Christmas. Growing up I had found Christmas mesmerizing: the beautiful Christmas lights, the piles of brightly colored wrapped presents, families going to Midnight Mass on Christmas Eve, delicious pasta and other Italian delights (I grew up in New York and my Christmas knowledge was from Italian friends.) I found their family traditions enchanting and magical.

Now as a mother with children of my own, I was determined to create some kind of magical memories for my family. This one evening, my kids, my husband and I were on our way to a pre-school Chanukah party. As we approached the building, I saw my good friend and her two little girls rushing away towards their car. This was odd; she was going the wrong way! Her two little daughters looked bewildered and my friend who was always calm, seemed abrupt and anxious.

“What’s wrong? Why are you leaving?? The party is just starting!”, I asked in the parking lot. I looked at the girls and they looked frightened. “They won’t let us in”, she answered. “WHAT??!!!” What could she be talking about?!  “I didn’t RSVP on time and they said they have no room” “WHAT?! They’re not going to let you in?!” As a (former) rule breaker, this made no sense to me. This was sacrilege! How could they turn away a mom with two little girls?! For a Chanukah party?!

I tried to stop her and encouraged her to come back with us, but she bolted off ushering her girls to their car. Thinking this must be some big mistake, I dashed to the party and told the lady at the front door about the mishap. I was a bit hyper and out of breath, ready to race back to my friend to fix the misunderstanding. The lady at the door calmly explained there was no error. She said that I (fyi this was out of character for me) had RSVP’d on time. The other family had not.

There was no arguing. She was stalwart. Confused and perturbed, we went into the party. An array of  donuts, a few children’s activities, it was very casual, very basic. It was not crowded. It was not particularly fun either (I guess I am still a little hot about this!).

The next morning, I called the Jewish center thinking again, they would want to know. This was a terrible mistake and surely they would not want to turn children away or represent themselves in this way. It was explained to me that the party had reached their limit. I argued. “This wasn’t right.” They said not everyone would get a donut if they had let more people in. I said, “Cut the donuts in half!” She said I might be okay with that, but many parents would not. No! I still argued not wanting this to be true.

Finally after a few more rounds I acquiesced, and we hung up.

That night I told my husband, I am done with religion. I did not grow up with a good or basically any religious experience and as an adult, I tried. I did not like what I saw. What was the point? It was not a far reach to quit since I had barely engaged in the first place. The next morning when I awoke, it came to me to go to the public library. I had never ventured to this little corner of the library before and was surprised to see they had a small Jewish section. An unfamiliar and quiet inner voice guided me to pick out book after book. I left with a stack of books I could barely carry. My ex- husband still jokes to this day, “Vivi said she’s done with religion and the next day she comes home with a huge pile of books. I asked her why and she said if she’s going to leave something, she should at least know what she’s leaving.”

“Seeing G-d” by Rabbi David Aaron was the first book that caught my eye. I didn’t believe in G-d, but okay. We’ll just see what this whole thing is about…

I LOVED the book.

And I LOVED the next book.

AND the next one. 💖 If you know anyone who might appreciate this story, would you please share?
And YOUR comments and stories are always welcome! 🥰
Cover Photo: My bubbe’s real menorah, Donuts Photo by Sheri Silver, DONUTS word Photo by  DJ Johnson,  Pile of books Photo by Gaelle Marcel. Gold/pink Photo by Sharon McCutcheon