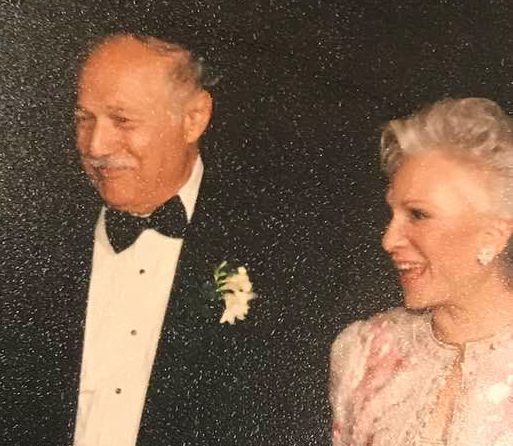 “I have dinner with people who have PhDs, with people who come from wealth, one friend is a nuclear physicist….. I’m a poor boy from the Bronx. I didn’t graduate high school …How do you think I do it?”,

said my dad during his mid-eighties. If you can recall from previous stories (THE FORGOTTEN ONES, and A BLUE EYED TRIBUTE), my dad grew up extremely poor. The story went, my mother was poor, “eating potatoes for breakfast, lunch and dinner and wearing potato sacks as dresses”. AND my father was POORER. She lived in the Bronx, he lived in the South Bronx.

My dad got by on his good looks and predominant strong-silent-type charm. Also, being a good dancer went a long way back in the 30s and 40s. However it did not transfer into his financial life. My father struggled providing for himself and his young family.

As said, my dad left high school without graduating, then enlisted in the army, and after a tragic World War II experience, returned home with a lifelong back injury. Other than being a great dancer and a good pool player, he had no specific skills. But Sam being Sam, with his fiercely independent streak, must have understood he needed to be in business for himself. He tried several different paths and all went kaput. Not for his lack of trying…he tried and tried, and failed and failed. Selling encyclopedias door to door. Nope. In another venture he invested the little money he put together into the “juke box” business. Got swindled and the money (and probably feelings of dignity) stolen. There were other flops…

With a wife and children, Sam in desperation reached back to the field he grew up knowing. His dad earned his living as a laundry truck driver, the mover of dirty and clean clothes. Sam’s shot was to open a dry-cleaning store, as the owner. But one problem, he had no money.

Never one to shy from challenge, Sam approached the seller of a dry-cleaning business. “You’re asking $10,000 for the shop. I’ll give you $20,000….. one year from now.” This meant no money down, a clear risk for the seller, and the possibility of winning big for both. The seller took the deal and the rest is history.

Sort of. Sam made the store successful, paid the seller in full one year later, and HATED the business.

It just didn’t suit him. But what do you do? He had to put food on the table and a roof over our heads. For about thirty years, he, with my mother working full time beside him and my brother and sister working weekends, did the day and night work grind.

Through the years, we’d frequently get police calls in the middle of the night that the store was broken into… again. My dad would make the long drive in the wee morning hours to deal with the mess. The general word on the street (in our house) was the store was boiling hot, machines were always breaking down, and nobody was happy. It sounded miserable and I somehow, as the youngest (about a decade between my siblings and I) was spared from going into the dreaded store to work.

DOCTORS ORDERS
A key undercurrent important to mention was that my father had a major heart attack at 38, before I was born. The doctors and family thought he would die. As it became apparent that he would recover, the doctors told him he had to change his whole life. He must live quietly in deed and really, in every way.

Despite my dad’s passion for life, his hated professional life just went on unhappily for years. It trickled down through the family.

YOU DON’T LOVE THINGS
Another key undercurrent was beauty. My dad would often say, “you don’t love things, you love people”. But he sure was taken with beauty. With over 250 ties (to which he never wore to his machine intensive work), Sam dressed like a “dandy” on his big dance nights out with my mom and their friends. He had lots of shoes and colorful dress shirts too, also saved for Saturday night lights. And not to forget the most beautiful and quantity filled garden you can imagine. Remember Reggie’s garden? Sam’s paralleled. Almost every square inch of our small yard was packed with flowers, shrubs, trees and a few tomatoes and pea plants on the side. People would drive by our

house just to look and we were contacted by Home and Garden or something like that to be featured. Mind you, our house and yardage were modest, but he managed to create a little Eden.

Financially, my family was getting by…money yes spent on ties, shoes, and shrubs, the indulgent once a week Chinese dinners out, and dancing…but still it was a tight ratio – debts to resources. There was a distinct strain of financial insecurity in our home.

THEY’RE JUNK, SAM
One day my dad went to an art show and returned with two (also modest) original paintings. Proud of himself, he showed them to his friend George, another dry cleaner, who knew a little about art. “They’re junk, Sam”, George said. NOOOOOO! 😱 Most would shrug, maybe feel a little stung.

Not Sam. Sam threw himself into study. With no goal in mind except beauty, he began his personal PhD-like study of art.

That meant, Sam was now in Manhattan galleries every Wednesday (his only week night off) and AAAAAALL day Sundays (his one day off). I attest the many Sundays, I, a disinterested pre-teen and teenager would sit bored to tears in gallery rooms as he slowly stalked each and every painting and would remain in ONE small room for what seemed like hours.

This was a passion of love. Ties, shoes, shrubs, and now art.

After one full year of intensive gallery visits and reading wall to wall art books now filling my older brother’s empty nest bedroom, Sam bought his next first painting again. He negotiated with sellers to buy on consignment.  Perhaps akin to his original dry-cleaning deal, he’d acquire the painting without money down, and when he sold it, he’d pay the owner a higher price than had he bought it outright (??). Regardless, he done good. Without trying to make a profit, just trying to keep buying more, with art now replacing his no longer growing tie collection, Sam ended up picking out winners. His paintings would double and quadruple in value. What a treat! Sam, like a little boy collecting baseball cards, FILLED OUR HOUSE WITH ART.

Teenage Vivi was very unhappy about taking down her rock and roll posters and having ART put up on the walls. Paintings were now crawling everywhere. Under beds, behind doors, hung from almost ceiling to floor on the walls, including the bathroom. People/strangers were milling through our house on Sundays as they admired and purchased paintings. Sunday mornings, asleep, I’d peek open to see “cultured urbane”

people strolling through my little bedroom perusing the walls of my  room and speaking in high class fashion. 😳 My dad moved from advertising in the local upstate paper to the New York Times as interest in this dandy’s art collection grew.

People kept asking my dad, “why do you have your gallery in your house?” My gallery???? Self imaged as that young tuff drop out, my dad found these questions almost ludicrous.

Along the line, wash n wear clothing came into vogue, and my dad’s dry-cleaning business completely tanked. At age 55, my dad took a plunge. Without a lot of ado, he re-mortgaged the house and OPENED AN ART GALLERY in New York City. I was an 11th grader and remember thinking…well this may go okay, OR we may need to move and everything may crash. For some reason, I wasn’t too worried. I was busy with friends and a teenage social life. How I didn’t worry? I’d like a piece of that now!

My dad’s self education, art immersion, gifted eye for beauty and his natural knack for business came together. His gallery was a success! For my part, we stayed in the house, I graduated from my beloved wild and crazy fun little public high school, got the opportunity to go to college with family support, and got to put my rock posters back up in my room!

Not to be pollyanna, but he truly transformed. Sam LOVED going into work every day and treated his employees and clients with great respect and sincere care. His clients, business partners, and employees fell in love with him too. At home, he became happier and delighted in sharing. He would bestow beauty on us with gifts and shopping sprees. Most profoundly he strived to express his years of restrained love breaking through his strong-silent-type exterior.

Several years later, my dad moved his gallery into NYC’s art mecca district and enjoyed tremendous respect. WETA TV solicited him for a documentary, and the New York Times featured articles on HIM twice! One, I just love still, called him “Catcher of the Fallen Angels”. It referred to how in the art business, successful gallery owners generally only show “recognized artists” because their business is to sell, and that’s who sells.

My dad, never one to follow the rules, would hold regular art exhibits for the artists who fell out of favor with the art world. He’d say, “They’re good. They deserve a show.” He’d sacrifice sales for the duration of the show to give them a platform, just because.

Despite all odds, my dad held tight to his vision of who he was and who he could be “Catcher of the Fallen Angels”, living full throttle, not giving up. Holding tight to our inner dreams and walking through road blocks, my father passed this to his three kids. Making it quite fresh, mine today include these writings… the vulnerability of revealing personal experiences here with the hope it may be useful to another, the reticent discomfort of going full throttle on social media to get the message out, and perhaps most daunting of all… fumbling through the rocket science waters of coding and other technical mysteries in order to create a blog, (I can’t even figure out how to operate my home television) 😳 … these are recent roadblocks, like red rover, I’ve needed to plow through. We all have gifts from our parents and ancestors. I thank mine for the fortitude I’ve acquired through no doings of my own.

HIGHFALUTIN COMPANIONS
“I have dinner with people who have PhDs, with people who come from wealth, one friend is a nuclear physicist….. I’m a poor boy from the Bronx. I didn’t graduate high school …How do you think I do it?”

I shrugged having no idea.

AGH
At the age of 87, just before my dad passed away, I was writing checks for his bills per his request. (I love that – his making sure his debts were paid!). But he wasn’t done.

Holed up in the hospital, not sure if he’d be able to walk again based on his recent accident, a bill came up for his next upcoming adventure, a trip to Turkey. I hesitated and asked, do you want me to pay this?

What do you think his answer was?

Or maybe he just gave me his infamous “Agh” gesture and I understood. He passed away before the trip began.

I am so glad he went ready to live full throttle to the end.   ©

If you think your friends might enjoy this, I’d love you to share! And please feel free to add your comments below.💖 Come back and visit any time!

2 thoughts on “AN AMERICAN DREAM & catcher of the fallen angels”